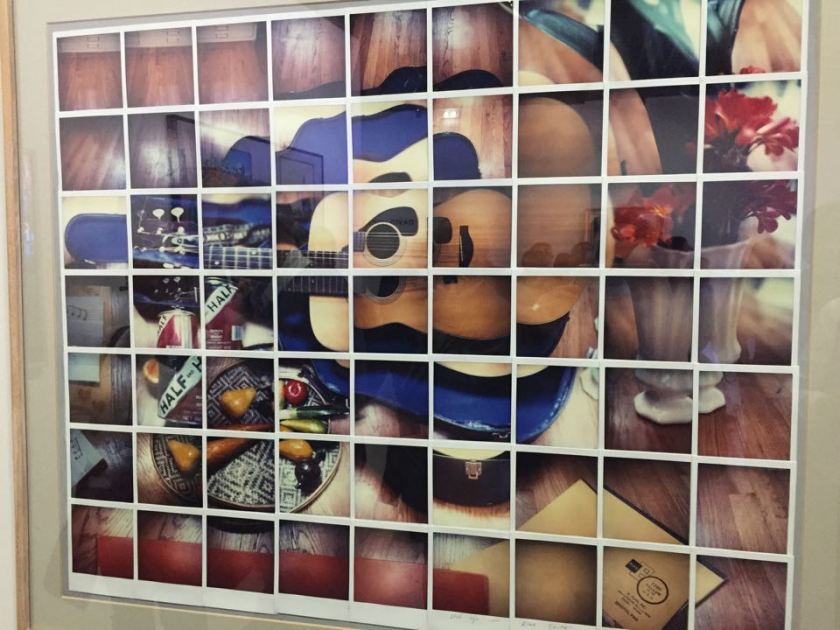 The Still Life Blue Guitar, 1982 is a composite Polaroids of David Hockney.  Composite Polaroids is the creation of a patchwork to make a composite image by using varying numbers of Polaroid snaps of a single subject.  In The Still Life, Blue Guitar, 1982, Hockney has photographed around the guitar itself, and this subject has been taken at different distances and from different angles.  This image symbolizes clearly Hockney’s view of photographing the whole scene, from different perspectives.

David Hockney is a great painter, but he is also famous for his photography.  Born in Bradford, England, in 1937, the artist attended art school in London before moving to Los Angeles in the 1960s. There, he painted his famous swimming pool paintings.  In Paris, Hockney produced portraits of artists as part of a series of highly finished crayon drawings between 1973 and 1975.  Each drawing was made in a single session lasting three or four hours.  Hockney was able to include Andy Warhol in this series of drawings when the Pop artist visited Paris.  The artist is quite convinced that painting can’t disappear because there’s nothing to replace it.  The photograph isn’t good enough and real enough in his opinion.  Throughout his career Hockney has enjoyed a love-hate relationship with the camera.  He began using photography in 1967 when he purchased his first 35mm camera and used it as an aide-mémoire for his painting.  In the 1970s, Hockney began working in photography, creating photo collages which he called “joiners”. He continues to create and exhibit art, and in a 2011 poll of 1,000 British painters and sculptors commissioned by The Other Art Fair, he was voted the most influential British artist of the 20th century.

David Hockney has taken inspiration from Picasso throughout his career. Since around 1980, he has taken on the theory of Cubism as a significant foundation for both his painting and photography.  The influence of Picasso emerges in Hockney’s artistic development so repeatedly and consistently that it almost provides a narrative to the younger artist’s career.  Hockney engaged directly with the idea of Picasso as master in two etchings, Artist and Model, 1973-74 and The Student-Homage to Picasso, 1973, made following the artist’s death in the same year.  He went on to produce a suite of twenty etchings inspired by Wallace Stevens’ 1937 poem The Man with the Blue Guitar, which was itself inspired by Picasso’s The Old Guitarist, 1903.  Using various Picasso motifs, his paintings explored a realm of imagination as opposed to rational observation.

The work Still Life, Blue Guitar, 1982 now displaying at the exhibition Picasso.mania at the Grand Palais in Paris demonstrates the artist’s enthusiasm for the work of Picasso and yet his long dissatisfaction with the “tyranny” of the single lens that dominates photography and film.

“I’ve finally figured out what’s wrong with photography. It’s a one-eyed man looking through a little hole.  Now, how much reality can there be in that?”– David Hockney

Hockney then tried to overcome this obstacle of the limited perspective of a stationary camera.  Since a single photograph can only show one point of view, usually for a small period of time, the artist was prompted to invent his “joiners” – taking Polaroid photographs of one subject and arranging them into a grid layout.  In fact, the creation of the “joiners” occurred accidentally.  He noticed in the late sixties that photographers were using cameras with wide-angle lenses to take pictures. He did not like such photographs because they always came out somewhat distorted.  He was working on a painting of a living room and terrace in Los Angeles.  He took Polaroid shots of the living room and glued them together, not intending for them to be a composition on their own.  Upon looking at the final composition, he realized it created a narrative, as if the viewer was moving through the room.  He began to work more and more with photography after this discovery and even stopped painting for a period of time to exclusively pursue this new style of photography.  Later he used regular 35 MM prints to create photo collages, compiling a ‘complete’ picture from a series of individually photographed details.

The idea behind Hockney’s grids was to inject multiple reference points into photography, in short, to make it cubist.  This use of multiple perspectives and “moving focus” in a variety of media ranging from his early “joiners” to the Polaroid and 35 MM photo-collages became the major productions of the artist in 1980s. 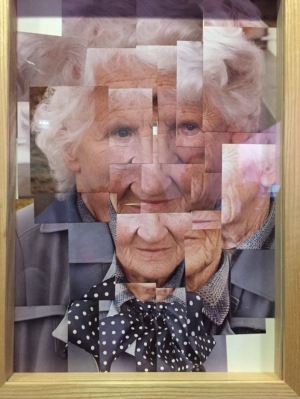 In the same exhibition Picasso.mania, we can see other works of David Hockney such as Mother I, Yorkshire Moors, 1985, and also The Jugglers, 2012.  The latter is a 9-minute video installation the artist created in his enormous Yorkshire studio.  To make it, he placed 18 individual fixed digital cameras mounted from the balcony that overlooks his sky-lit studio, and hired twelve members of the nearby York Juggling Club to perform against a background of striking bright blue floor and fire-engine red backdrop he had painted especially for the filming.