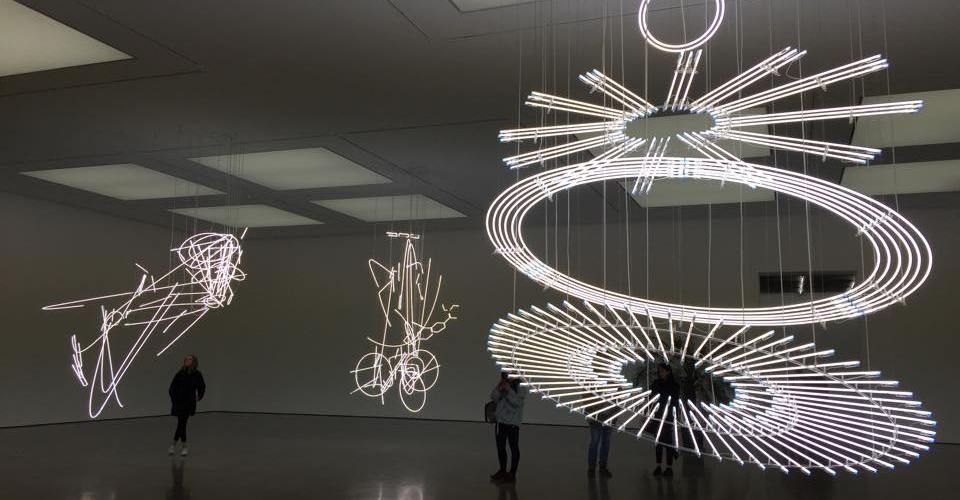 The Illuminating Gas… (after Oculist Witnesses), 2015 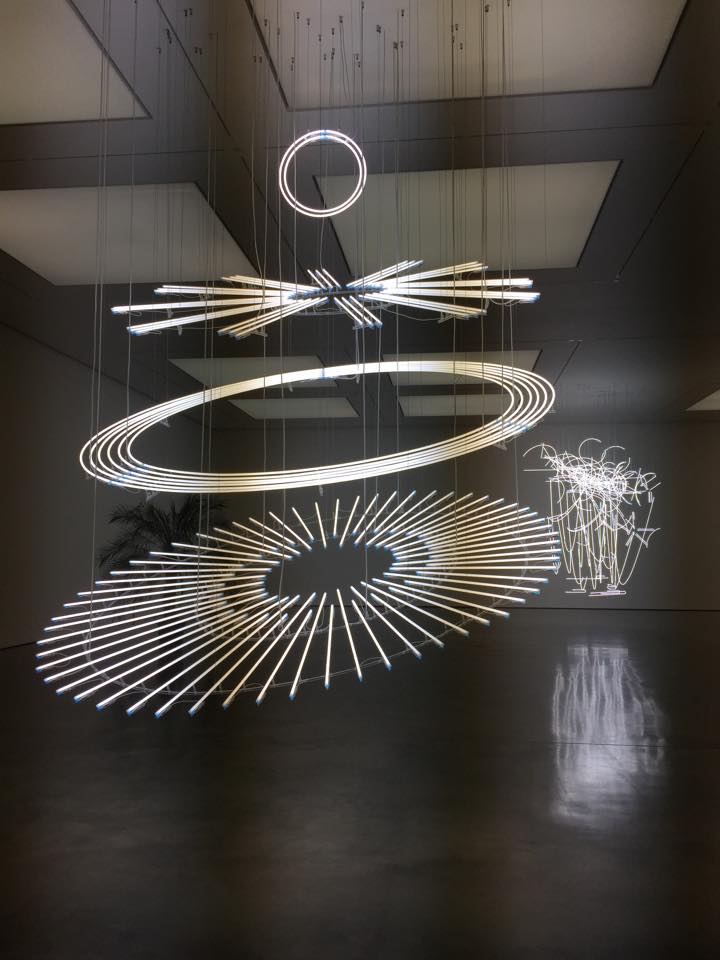 The Illuminating Gas… (after Oculist Witnesses), displayed right at the entrance of the South Galleries of White Cube Bermondsey in London, is an installation of Cerith Wyn Evans  with three vast discs in bright white neon suspended from the ceiling at a skewed angle, imposing a foreshortened perspective.

The inspiration of the installation is drawn from the mysterious tripartite radial forms of the ‘Oculist Witnesses’ in Marcel Duchamp’s work The Bride Stripped Bare by Her Bachelors, Even, most often called The Large Glass (Le Grand Verre), 1915–23.  The Illuminating Gas… (after Oculist Witnesses) recreated the forms of Duchamp’s original work into multi-dimensional objects.

Duchamp’s art does not lend itself to simple interpretations.  For The Large Glass, while some critics read the piece as an exploration of male and female desire having complication as its upper and lower realms are separated from each other forever by a horizon; other modern critics see the painting as an expression of the artist to ridicule criticism.  The installation of Cerith Wyn Evans stages the exploration of established and establishing time-space relationship, separating itself from the surrounding visual field.  The forms fold and mesh different figures into each other, thereby evoking unforeseen registers of perception. 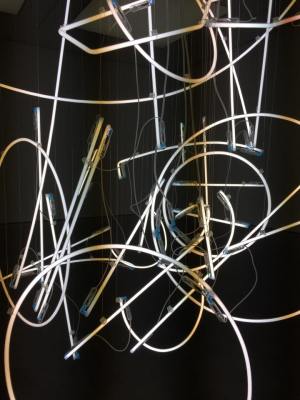 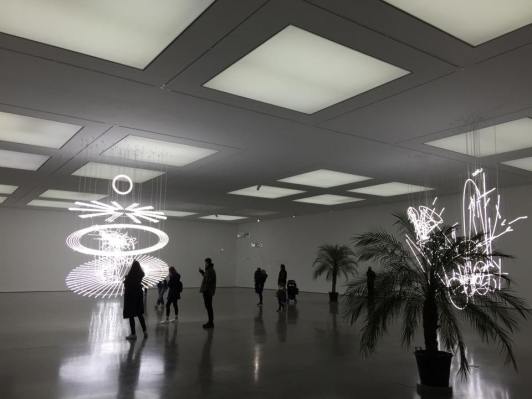 Born in Wales in 1958, Wyn Evans studied at St. Martin’s School of Art in London, where he first began to use unorthodox materials in his artwork.  Wyn Evans began his career as a filmmaker — it wasn’t until the 1990s that he turned his attention to installation artwork as well.  Looking at his creation, his background in the visual becomes extremely obvious.  Much as a director uses light and darkness in his movies to create a desired emotional response, the artist plays with refracting mirrors and flashing lights to guide his audience’s reaction to his work.  As a conceptual artist, sculptor and film-maker, his installations, sculptures, photographs, and films direct to evoke “polyphony, superimposition, layers, levels, the occluded, and the visibility”.  What drives his practice is his fascination with perception—how we understand texts, language, our surroundings, and each other.  The artist combines and re-presents recognizable objects, texts, and images to catalyze a multiplicity of new, open-ended meanings.

In the same room, the artist also displays three neon works which are suspended from the ceiling taking their forms from the codified and precise movements of Japanese Noh theatre (Neon forms [after Noh I, II and III], all 2015).  These works present a maze of complex lines that trace the trajectory of alignments, gestures, folds, orientations and footsteps; transposing and transforming energies into both material charge and visual form. 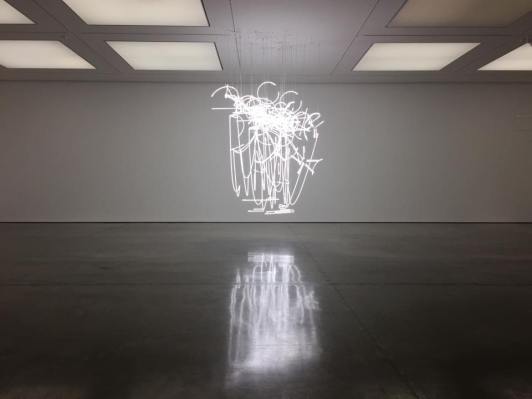 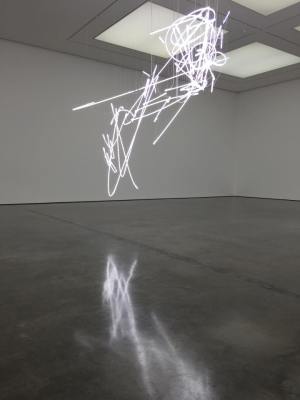 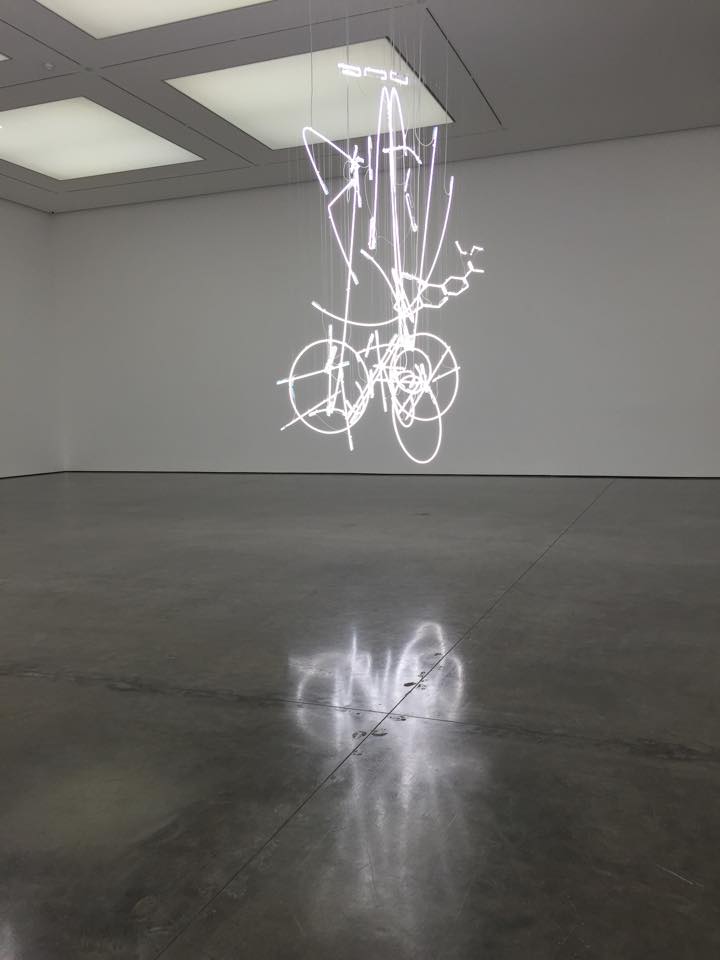 According to White Cube, Wyn Evans’ works exist and take their form through the reflection on and interrogation of the world about us, adopting what Martin Prinzhorn has identified as strategies of ‘superimposition and contradiction, by concealing and revealing’, to create moments of rupture within existing structures of communication whether visual, audio or conceptual.  The artist has focused on ideas around the flows of energy via material and immaterial conduits, circuitry and choreology – the practice of translating movement into notational form.

Interspersed amongst the neon works are plants placed on turntables that rotate almost imperceptibly, enhancing the otherworldly atmosphere.  At the far end of the room a sound sculpture constructed of 19 “breathing” transparent glass flutes emit what White Cube describes as “a mellifluous breath-like sound.”  In the corridor space Evans has reconfigured an existing ceiling light fixture to convey in Morse code a text that describes the transit of the moon creating a solar eclipse. 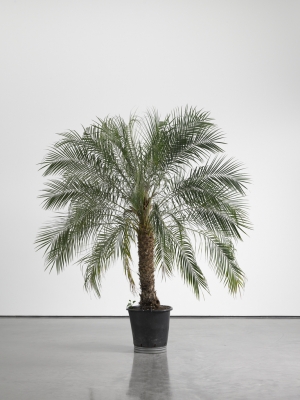 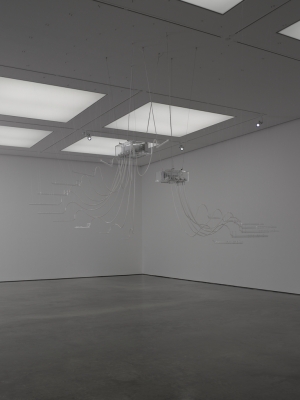 The works on display takes on Evans’ signature style of tracing the complexity of gestures, motions and shapes in light.  It is a characteristic paradox that Wyn Evans chooses light to transmit obscurity.  His creations make viewers question their preconceived notions about artwork and perception, making them ponder whether they’re looking upon bright neon lighting or translated versions of philosophical questions.