Artwork of the Week

Currently displayed at the Tate Modern in London under The EY Exhibition: The World Goes Pop, Red Coat for Eleven People or Same Skin for Everybody, 1969 is a plastic cagoule made of vinyl, designed to be worn by eleven people together who have to hobble along at the same time.

This vast frameless canvas, molded around 11 empty pockets tailored to fit the dimensions of 11 human bodies, was designed by the inventive French conceptual artist Nicola L.  The work was originally created for the Festival of the Isle of Wight in 1970, where musicians such as Gilberto Gil, Jimmy Hendrix and Joan Baez performed.  The artist designed this piece to be worn by the Brazilian musicians and she distributed gloves emblazoned with the message ‘same skin for everybody’ which provoke the audience into chanting in unison.

The Red Coat is exemplary of Nicola L.’s experimentation with the manner in which the body interacts with the artwork and the self is exposed to the other.  Designed to be embodied, it blurs the boundaries between the body and the object.  By inciting the desire to share a collective skin, it realized an experiment in collectivism and egalitarianism in which people have to change the original way they move and they walk.

The performances have been taken place in various public spaces since 1970.  On the streets of Amsterdam, Brussels and New York, the artist invited people to get inside the coat.  She took the lead to connect people who didn’t know each other five minutes before.  It strips the ‘body’ of any particular gender identity and immerses the wearers in a communal performance to declare a peaceful notion.  Another Red Coat was enacted on the snowy slopes of the French Alps with 11 professional skiers trying to ski collectively down a mountain.

When the performance was held in Barcelona, it was brought to an end by Franco’s police because they suspected that the Red Coat was a cover for secret meetings.  The Red Coat continued to be re-enacted in the 1990s and was followed by new versions in different colors and for smaller groups.  In 1995, Nicola L. designed the Black Coat, which is dedicated to the memory of nine women from different time periods which Nicola called “femmes fatales”, including Madame Bovary, Frida Kahlo, Joan of Arc and Ulrike Meinhof.  From 2001, Nicola L. started to present the ‘Blue Cape’, performances symbolizing protection, peace and cooperation, in places such as Havana, Venice, Geneva and the Great Wall of China. 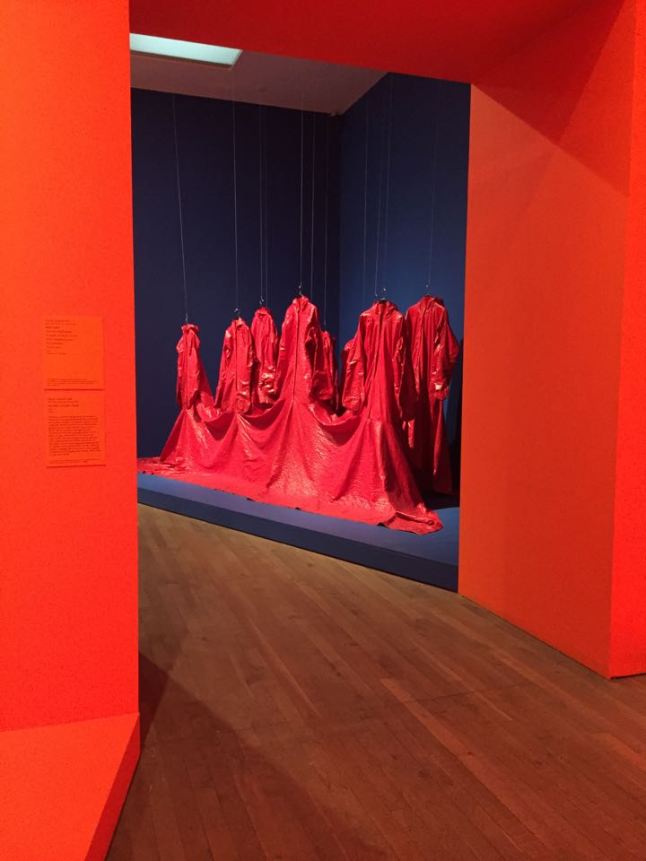 Nicola L. was born in Mazagan, Morocco in 1937 and now lives and works in New York City.  The artist studied art at the Académie Julian in Paris, followed by the École des Beaux-Arts in Paris at the atelier of painter Jean Souverbie.  While still being an art student in Paris in the 1960s, Nicola L turned away from painting, destroying all of her works in a radical act, and began creating actions, performances, environments and body objects.  She began to experiment with works she called “Pénétrables”, a series of canvases in which the viewers could introduce parts of their body and get into the skin.  Nicola L. has interrogated the integration of the human body within the space of the artwork, developing conceptual works, functional objects, installations, performances and films.  Her conceptual work hinges on two approaches that open the door to a myriad of possibilities – to make bodies, and to embody.  To embody means to collect bodies within a single skin in order to inhabit a space collectively, organically, and see it from the vantage of a second skin.  Behind the playfulness of her works, these works were conceived as a political statement addressing, beyond the boundaries of painting, the individual’s social skin.

Influenced by second-wave feminism and the civil rights movement, the Red Coat reminds us our similarities as a species far outweigh our differences – issues pertinent today with transgender and gay rights.